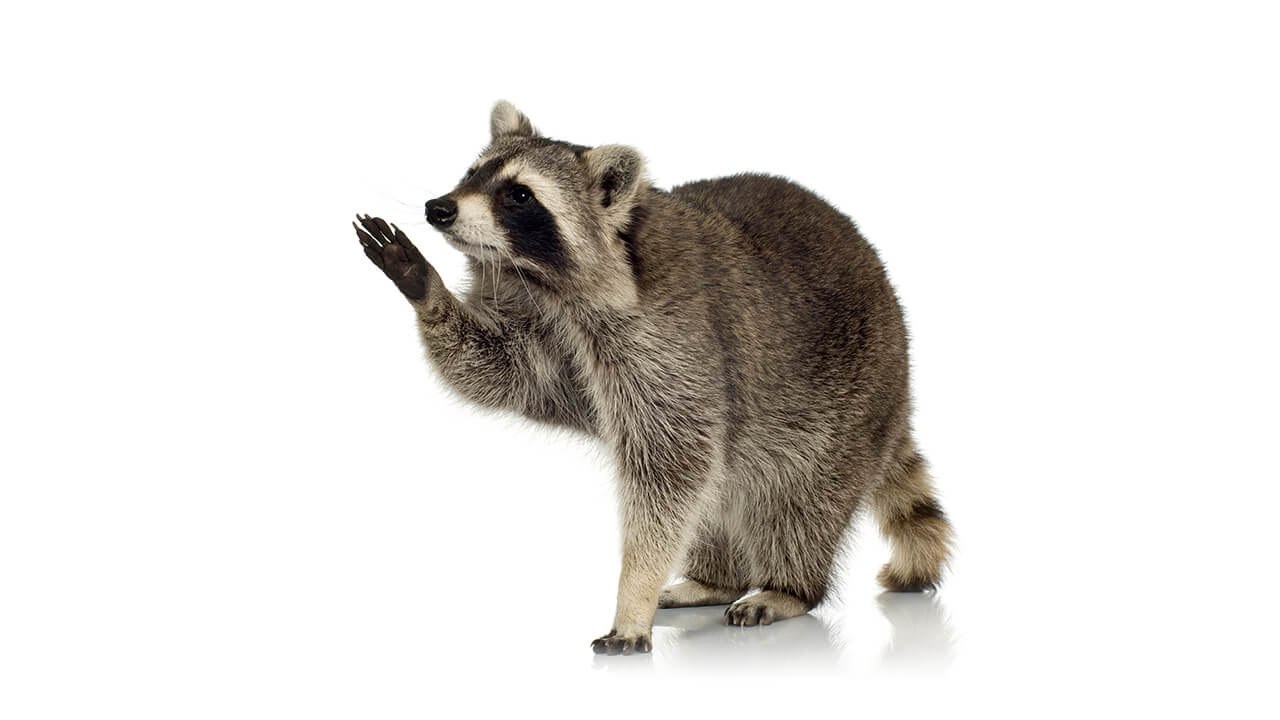 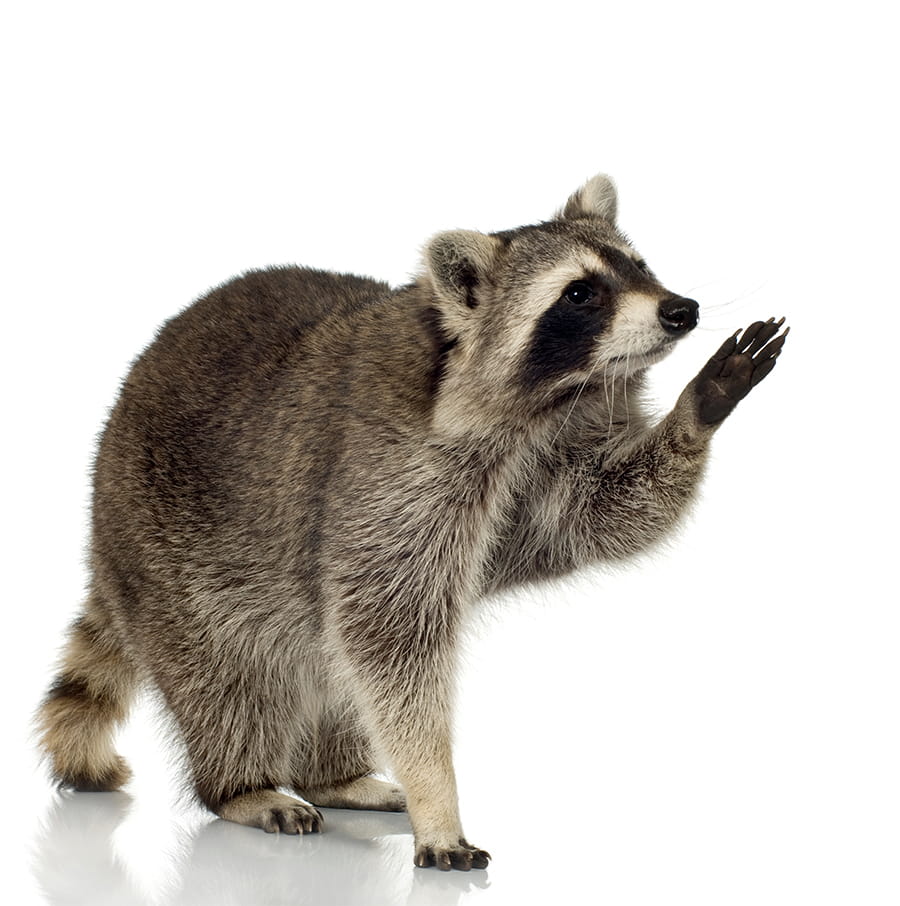 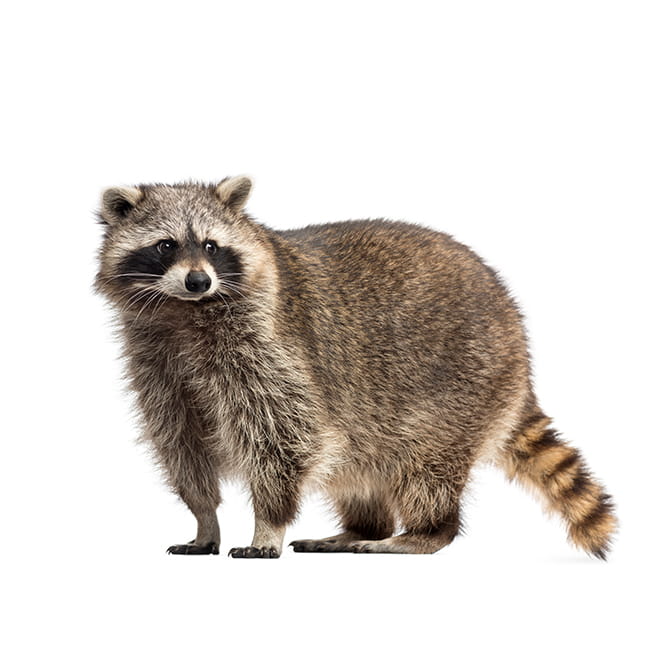 Raccoons can carry several dangerous diseases, like rabies, roundworm, and leptospirosis that can be transmitted to humans.

While incidents of rabid raccoons attacking humans are rare, homeowners should not risk removing raccoons from their property on their own.

Fleas and ticks are also often associated with these vertebrate pests and can enter a home through fireplace hearths and attic openings to bother homeowners and infest living spaces as secondary pests.

Droppings/or fecal material from these large vertebrate pests can also accumulate in attics, vents, and chimneys.

Odours are unpleasant, and diseases associated with the droppings can pose a health risk.

The damage done by raccoons to structures looking for shelter and in lawns looking for food in the form of grubs or earthworms is also frustrating and costly to homeowners.

All raccoons are marked with a trademark black 'mask' around the eyes and a heavily furred, black ringed tail. From rainforests wooded forests to city streets, these scrappy mammals will live almost anywhere.

Raccoons are most recognizable by the mask-like black fur around their eyes and light and dark rings around their tail. The rest of their bodies are covered in grey-brown fur. Raccoons may weigh between 5.25kg to 16kg, or more, and can grow between 145cm to 91cm.

Found throughout North America, raccoons prefer wooded areas. They are adaptable to different environments as long as there is food, water, and shelter available.

Raccoons are nocturnal, and males are very territorial with little overlap of territory with other raccoons.

Raccoons do not hibernate even in Northern climates but remain inactive during severe winter weather.

Raccoons are omnivorous and eat both plants and animals. Some particular favourites include berries, nuts, frogs, fish, crayfish, small rodents, and bird eggs, to name a few.

Around our homes and buildings, they prefer to feast on the garbage and other readily available food sources like compost piles and bird feeders.

Raccoons can live up to 12 years. In the wild, they can live for five or six years. Mating usually occurs in February but can continue into June.

The year's first litters are born in April and May. A female will usually only have one litter per year, and it will consist of two to five young on average. Litters may be as small as one and as large as 12 however, this is rare.

Raccoons are not considered dangerous. They are however extremely powerful and will attack or defend themselves if provoked.

Some raccoons have become accustomed to the presence of humans, especially in parks and around cottages, and are approachable. It's important to remember that they are wild and not domestic animals.

Rabies in raccoons has increased dramatically, and they are now the main wildlife host of the disease. Family pets that encounter rabid raccoons may become infected and consequently become dangerous to family members.

Make sure your pet has been vaccinated against rabies.

How is a rabid raccoon recognized?

A raccoon may be rabid if they are seen active during the day. If they appear to have lost their sense of balance, have numerous bite marks around the face, or appear unkempt and scruffy, and make unusual sounds similar to a hurt or distressed cat, they may be rabid. Such animals should be reported to the police or your local animal control authority.

What kind of damage will raccoons do?

In urban environments, raccoons are more than capable of finding their way into homes in uncapped chimneys, tearing off shingles or fascia to gain entrance to an attic or wall void.

They are also good at tearing up lawns in search of grubs and earthworms, destroying gardens, and getting into garbage cans.

In attics and wall voids, the build-up of raccoon feces and urine can constitute health hazards to the homeowner. In more rural environments, raccoons can be highly destructive in and around poultry barns.

No. Baby raccoons are cute and are often the objects of sympathy when they are orphaned or found as strays.

Consequently, they are taken into homes, as pets, by people wishing to help the animal.

When someone brings a raccoon into the home, they are also bringing in the potential for numerous infectious diseases.

Also, raccoons will always revert to their wild tendencies, and juvenile and adult raccoons become unpredictable and difficult to handle.

How long do raccoons live and how often do they reproduce?

Raccoons can live up to 12 years, but this is rare in the wild. They usually live for 5 or 6 years. Mating occurs in February but can continue into June, and the year's first litters are born in April and May. Females usually only have one litter a year, with two to five young on average. Litters may be as small as one and as large as 12 however, this is rare.

Where do raccoons live?

Found throughout North America, raccoons prefer wooded areas however, they are quite adaptable to different environments as long as there is food, water, and shelter available.

How can I prevent raccoons from establishing themselves on my property?

Exclusion is the best means of raccoon prevention because raccoons are such good climbers it is important to keep tree limbs away from rooftops.

Chimneys should be capped, holes in walls and roofs should be repaired, and doors into garages and sheds should be kept closed during the evenings.

Sanitation is very important. Keeping your property free from garbage and other debris will discourage their presence. Birdseed and bird feeders should be removed, eliminating a readily available food source. Fountains can also attract and provide easy access to water.

Garbage cans should be made of heavy plastic or metal, equipped with tight-fitting lids with fasteners, and should be secured against capsizing. Just covering a garbage can with a lid would pose no challenge to any raccoon.

If raccoons are suspected, contact your local Abell Branch Office for an inspection and safe exclusion practices done by professionally trained wildlife technicians.

It is important to remember this point: never exclude a raccoon from an area of your home if the animal has young.

Desperate mother raccoons are capable of unimaginable damage in attempting to get back to her litter. Also, should the young die, the structure will be faced with a variety of new problems, namely stench and flies.