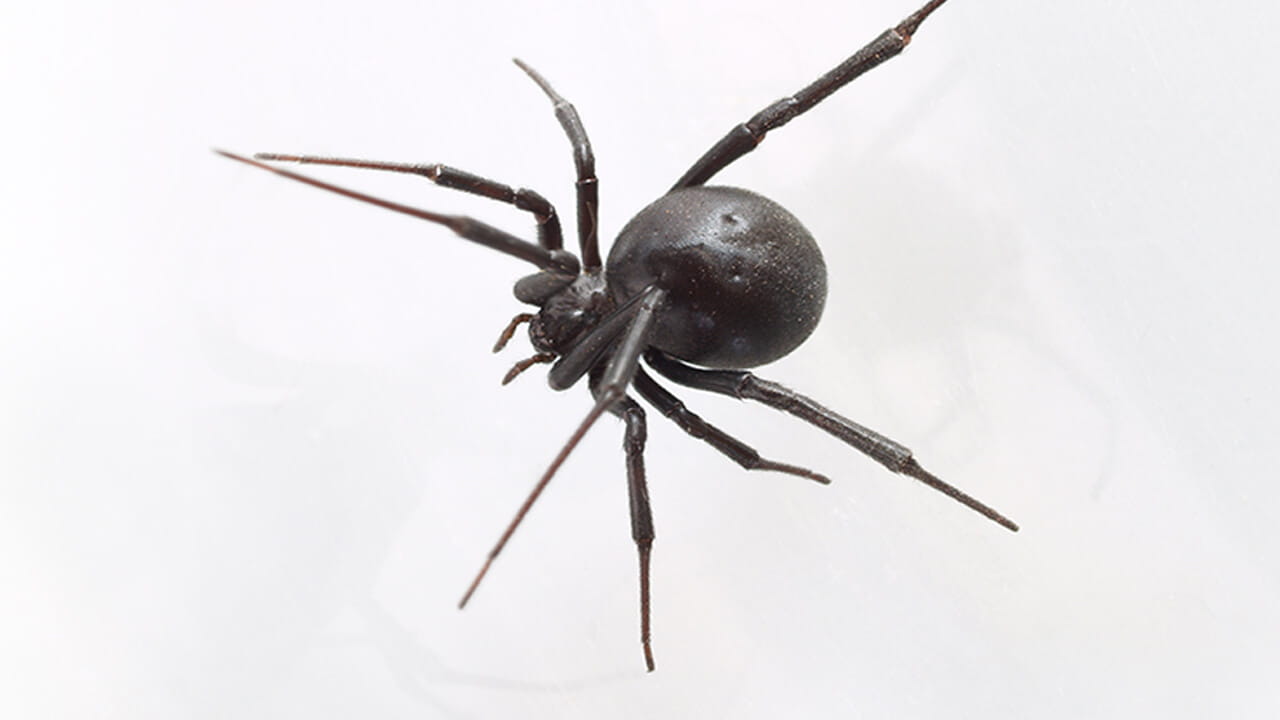 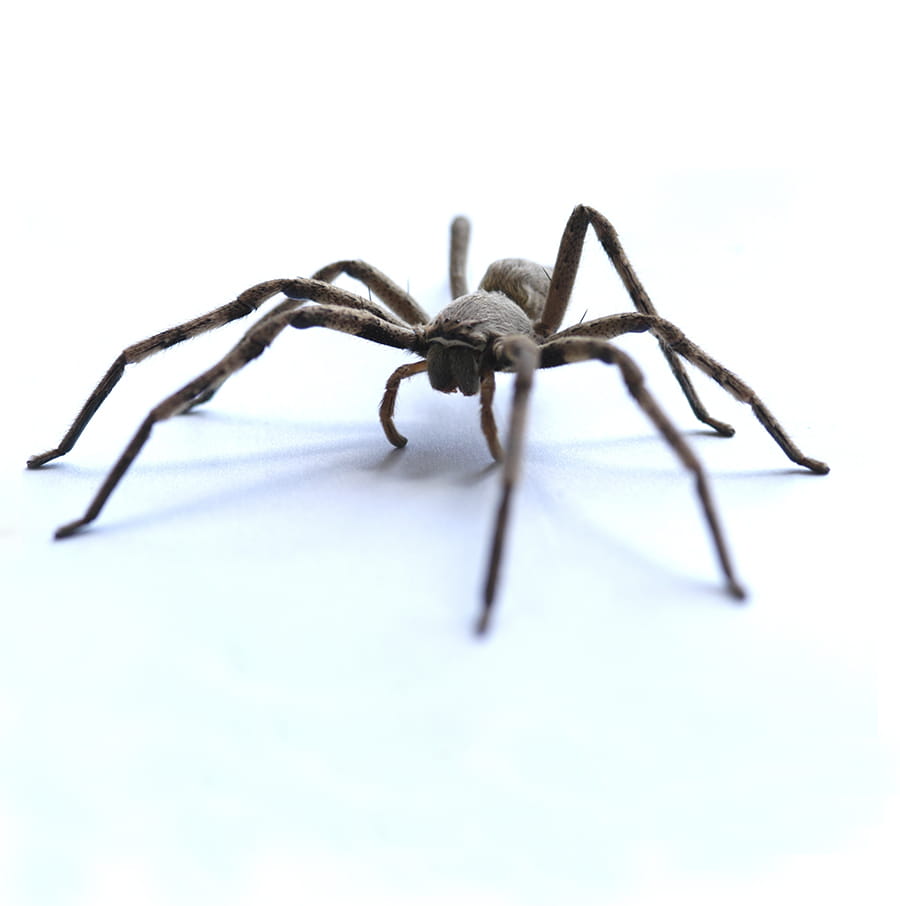 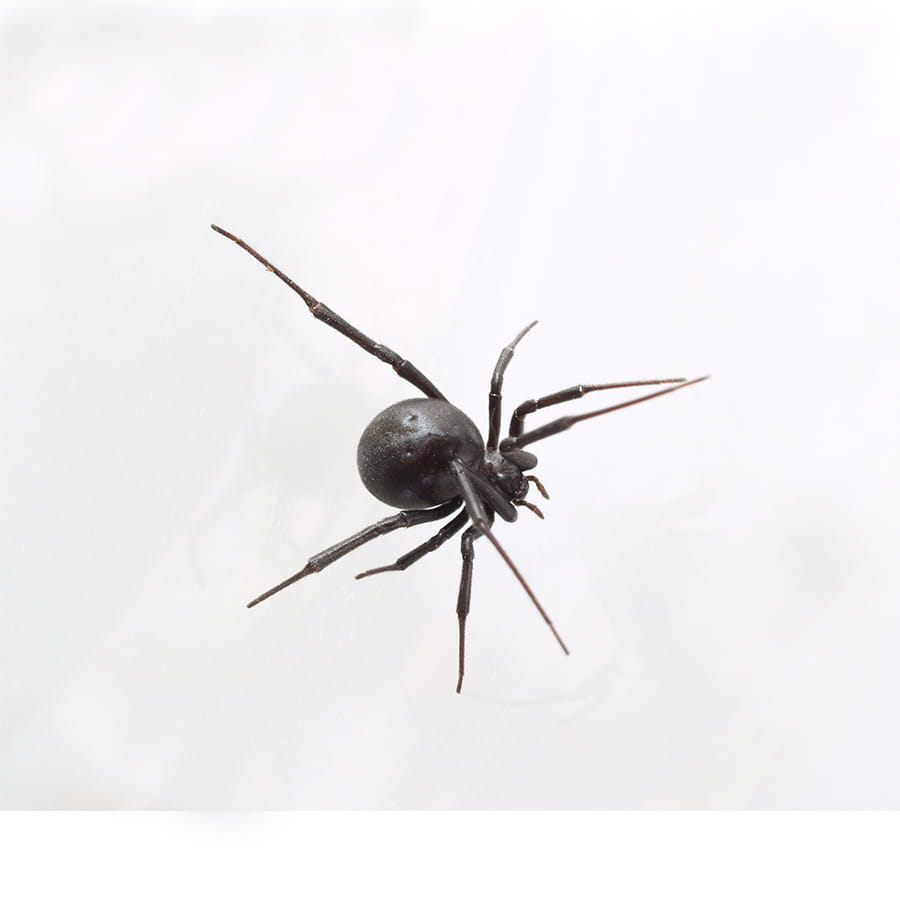 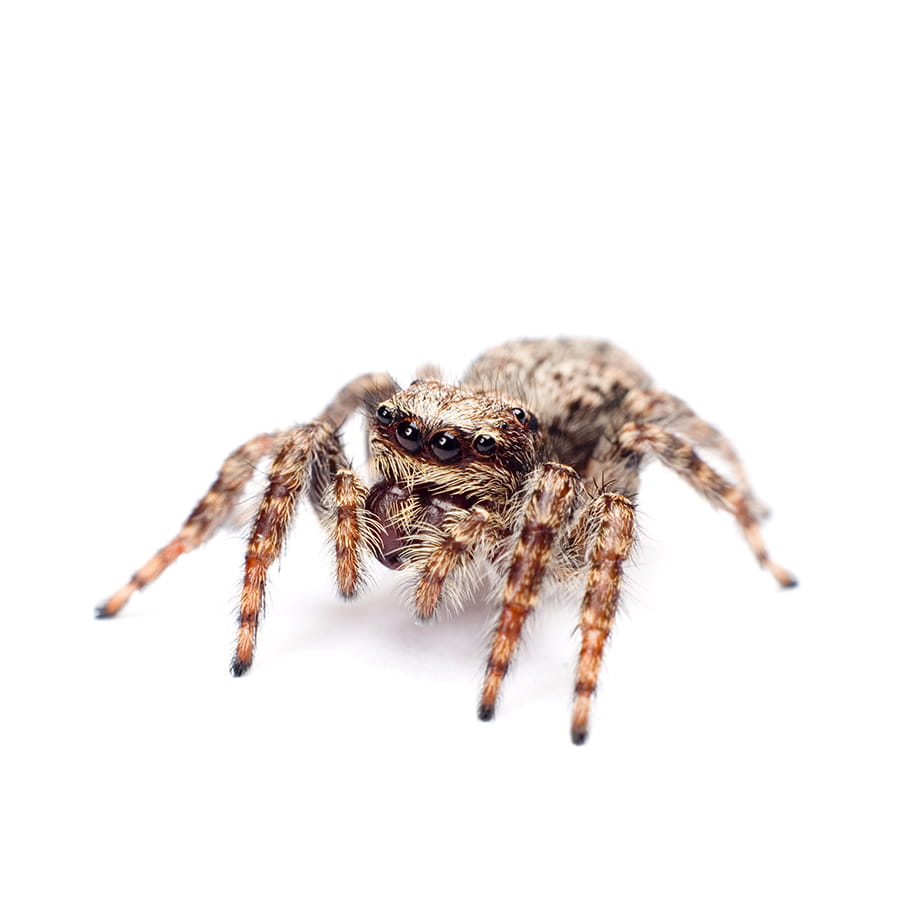 Spiders have eight legs and up to eight eyes and are thought of as beneficial more than dangerous. Spiders seek out secluded, undisturbed areas where they can build a web to catch their next meal, which means attics, basements, and closets could be harboring these pests. Spiders can also crawl into homes through damaged window screens or cracks in the siding.

Spiders have two body regions connected by a restricted waist. The fused head and thorax have two jaws, two palps, eight legs, and up to eight eyes. The abdomen is unsegmented and holds the spinneret.

There are about 10-15 spider families normally considered urban as they are more likely to be encountered. Depending on the species, the body of spiders differ.

Spiders generally live in the wild, but they are often brought into properties on firewood and flowers. Spiders can also crawl into homes through damaged window screens or cracks in the siding. They are often found around windows since other insects are attracted to this area.

A female spider will lay approximately 30-50 eggs to several hundred eggs in a silken sac. Nine egg sacs are common in a season, and these eggs may hatch after 1-2 weeks up to 8 months depending on environmental conditions and species. Many spiders will live for about 1-2 years, but few can live as long as 5-20 years.

What do spiders eat?

Spiders feed mainly on insects and other small arthropods and are generally thought of as beneficial in that respect.

Where do I find spiders?

Spiders generally live in the wild but often enter properties on firewood and flowers. Spiders can also crawl into homes through damaged window screens or cracks in the siding. Attics, basements, and closets could be harbouring these pests. They are found around windows since other insects are attracted to these areas.

What are some of the most common types of spiders? Do they pose a threat to my health?

Black widows are black and shiny, with a telltale red hourglass shape on the underside of their abdomen. Black widow spiders seek out dry and dark locations that are protected, such as underneath stones or decks, in hollow tree stumps, and firewood piles. Black widow spiders spin their webs near ground level.

While male black widow spiders rarely bite, females are known to be aggressive and bite in defense, especially when guarding eggs. Symptoms of a black widow bite include fever, increased blood pressure, sweating and nausea. Pain from a bite typically reaches a maximum in 1-3 hours.

Brown recluse spiders are light to dark brown, with a characteristic dark brown violin marking on their back. Well known for their secretive or "reclusive" behavior, brown recluse spiders often live outdoors in debris and woodpiles. Indoors, they can be found under furniture, inside storage items, and in dark recesses such as baseboards and window moldings. Closets, attics, and crawlspaces are the most common hiding places of brown recluse spiders, as they provide warm, dry, and dark environments.

Like the black widow spider, the brown recluse spider bites in defense. Bites are usually not felt at first but can produce a stinging sensation followed by intense pain. Their venom may produce necrosis or dead tissue which result in an ulcerating type of sore. Restlessness, fever, and difficulty sleeping are common symptoms of a brown recluse spider bite.

House spiders are often yellowish-brown in color with an elongated abdomen, although their color can be highly variable. While this species can be found under furniture and in closets, they are most commonly encountered in garages, sheds, and barns, where catching prey is easier for them. Outside, they are often found spinning webs around windows and under eaves, especially near light sources that attract potential food sources. Common house spiders are nuisance pests and pose relatively little threat to humans, but they may bite when threatened.

Jumping spiders are compact in shape with short legs, causing them to sometimes be mistaken for black widow spiders. They are usually black and covered with dense hair or scales that are brightly colored. Jumping spiders build web retreats, which can be found both indoors and outdoors. Unlike most spiders, these spiders are active during the daytime and they like sunshine. Jumping spiders may bite in defense, but their bite is not poisonous. This species is more likely to run from a human threat rather than attack.

Cellar spiders are pale yellow to light brown with long, skinny legs and a small body. Cellar spiders thrive in humidity and moisture found in basements and crawlspaces. They can also be found in the corners of garages, sheds, barns, and warehouses, on eaves, windows, and ceilings, and inside closets, sink cabinets, and bath traps. Cellar spiders are not known to bite and pose no threat to humans.

Wolf spiders are usually dark brown with paler stripes or markings, and they have long, spiny legs. This species is often large and hairy, which can alarm some people. Wolf spiders can enter structures in search of prey. Once inside, they tend to stay at or near floor level, especially along walls and under furniture. Wolf spiders can bite, but rare unless they are provoked or handled.

Are spiders active in winter?

Spiders are found year-round but are most prevalent during warm months. In the wild, adult spiders may die when it’s too cold, while the young will overwinter in a dormant state.

Two spider species are particularly dangerous to humans - the black widow and the brown recluse spiders. These spiders are native to the United States. Black widow spiders are found in Canada from British Colombia to Ontario. Brown recluse spider is very seldom found in Canada if at all (only in case it is transported from abroad). If bitten by any spider, you should receive immediate medical attention.

What are their breeding habits? Do spiders multiply quickly?

A female spider will lay approximately 30-50 eggs to several hundred in a silken sac. Nine egg sacs are common in a season, and these eggs hatch after a week or two or more depending on environmental conditions and species.

Do all spiders spin webs?

No. Some spiders spin webs for catching prey or for retreat while others live in the ground.

What can I do to avert spiders?