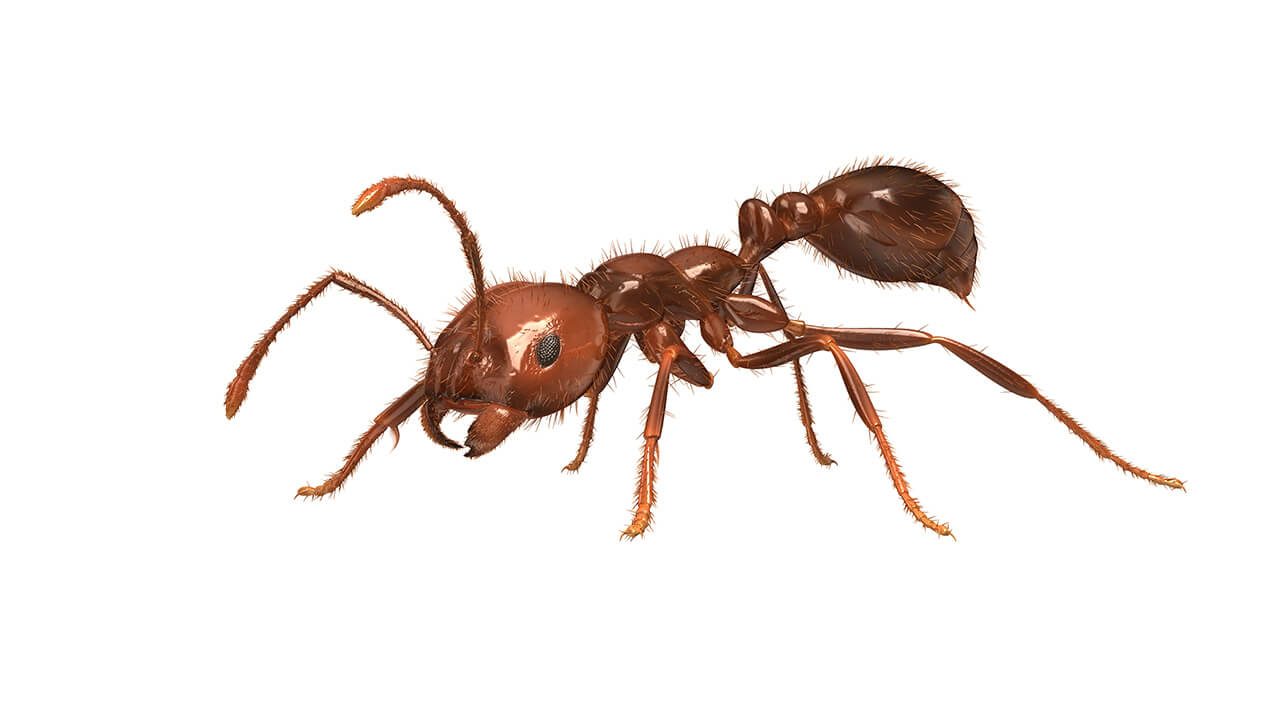 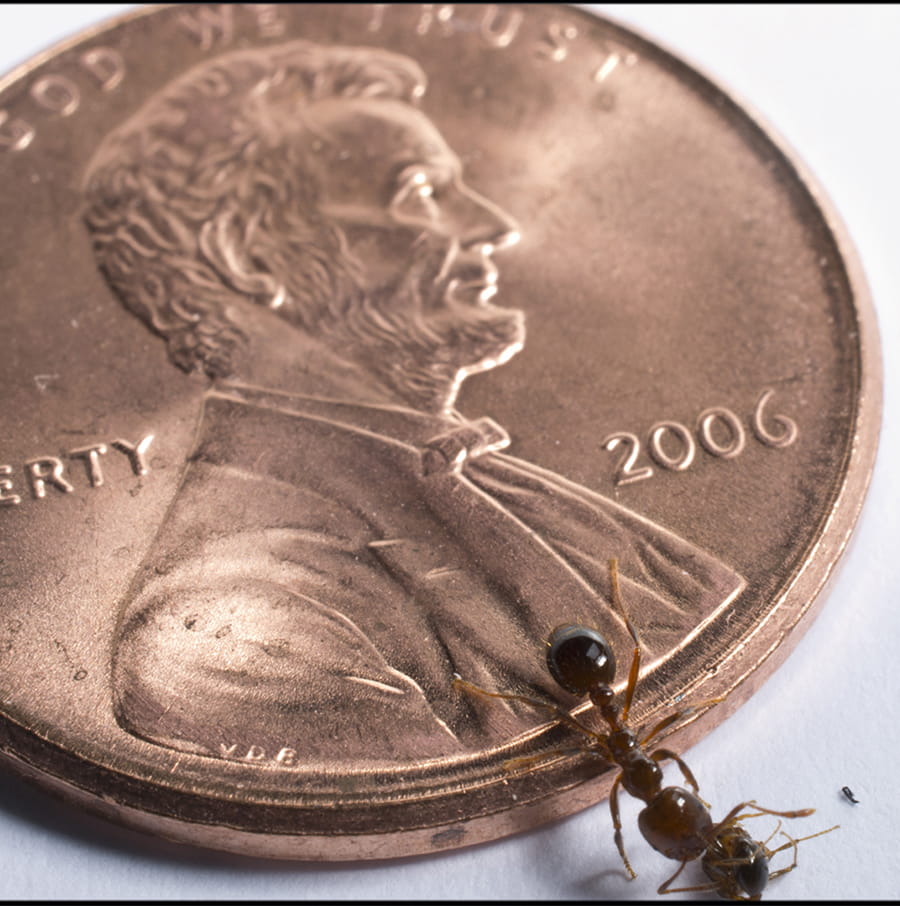 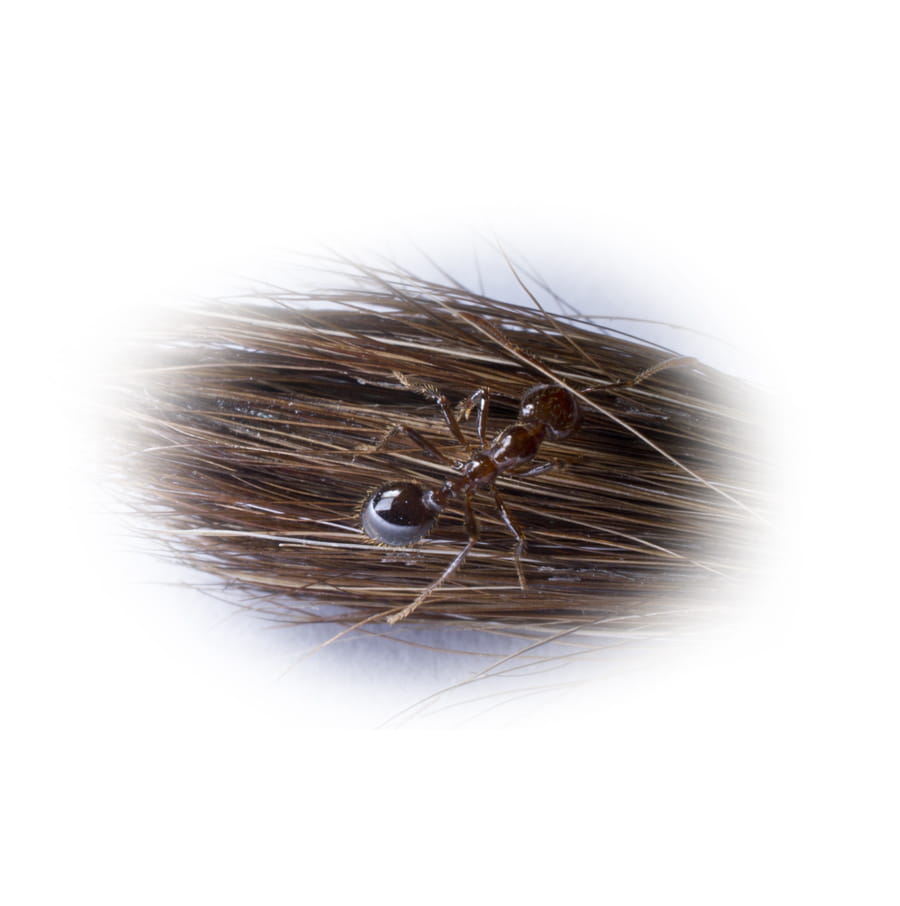 European fire ants are aggressive stingers and can sting repeatedly. Their sting is accompanied by a temporary, painful, burning sensation. Nests are hidden and difficult to detect, and people who unknowingly disturb the nest can quickly be swarmed and stung by ants protecting their nests.

Large numbers of workers are usually actively foraging outside the nest in invaded habitats. These foragers are present in dense numbers on the ground and above ground vegetation. They can crawl onto people or pets as they brush against foliage when moving through infested areas.

European fire ants are tiny red ants that are a pest for people and their pets, and a threat to the environment.

European Fire ants are small, reddish, with two backward-pointing spines on the middle body section, visible only with a magnifying glass. The constricted "waist" has two segments: most native species have only one.

European fire ants are about four or five millimeters or 3/16 of an inch in length.

European fire ants are native to the northern parts of Europe and Asia. They were introduced to North America in the first half of the 20th century, likely through infested containers of plants. This species of ant doesn't seem to mind the cold, so climate has not slowed its steady spread northward. Its arrival in Canada is relatively recent.

Their diverse and cold native habitat makes them well adapted to the weather and as such, they have established themselves in various locations throughout the Maritime provinces of Canada, and Quebec, Ontario, and Vancouver.

Fire ants like moist environments and often establish nests inside decaying logs, in soil, under rocks or debris, and even in potted plants. Multiple nests in one property are common. In fact, it's not unusual to find a dozen nests in an area of just 10 square meters.

From egg hatch to egg production, queens take at least two years to start a colony. In North America, nuptial flights have not been seen and nests spread through budding which means queens take number of workers and establish new nest. European fire ant colonies are ‘polygynous’ (i.e., many queens) and ‘polydomous’ (i.e., many nests per individual colony), allowing for high densities of the ants in a given area.

What are the health impacts of bites and stings?

True to their name, the sting from a fire ant causes painful burns. After biting, the ant uses its stinger to release a venom comprised of alkaloids, and proteins that can cause allergic reactions. Stings result in burning, itching and localized inflammation that can last for many days. Anaphylactic reactions or swollen limbs from fire ant stings, although rare, are well documented and can develop even hours after the sting has occurred.

During a fire ant attack, it is recommended that people brush off the ants with swift movement of the hands.

Why do European Fire Ants attack?

Fire ants are very aggressive in defending their territory. Disturbing a nest or the foraging area can lead to a quick attack by dozens of ants. The ants will attack anything that stays too long in its territory — humans, pets, and livestock included. A typical nest can have 1,000 workers but some nests have been found with hundreds of queens and more than 10,000 workers.

How can I get rid of European Fire Ants?

Getting rid of European fire ant nest/s is not a DIY project because they are very aggressive ant and can cause real harm. Call reputable pest control company {Abell Pest Control} to manage it in professional and safe way.