Blow flies will follow a path to rotting garbage 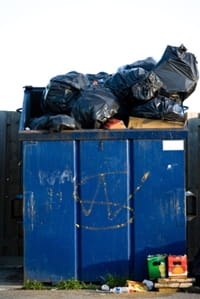 The blow fly may have a place in literary history - it's been mentioned in Shakespearean plays - but that doesn't mean it's welcome in businesses that involve food preparation, meat production sites or homes.

Some people may confuse them with horse flies, which are in the same fly family. Like horse flies, blow flies are larger than standard house flies and have an iridescent green, blue or brown body. Unlike some flying insects, like carpenter bees, these pests aren't interested in structures. Their favorite target is rotting meat and other decayed organic matter found in garbage and manure.

That may explain why they're the most common flies found hovering over dead animals, on which they lay their eggs. In populated areas, they're likely to be drawn to meat processing plants, garbage dumps and slaughterhouses. But any rotting matter can attract them, so houses aren't spared if they're located near one of these businesses or if homeowners have treated their own garbage disposal casually.

As with most pest management, improved sanitation habits and elimination of trash that attracts blow flies is crucial. Emptying and cleaning trash receptacles weekly is important to prevent a blow fly infestation.

If an infestation should occur, the best step that business owners can take is to call professionals like Abell Pest Control who handle the toughest pest removal cases. By then, killing adult flies won't be enough - a thorough analysis of the pest problem followed by a treatment plan and continued maintenance of disposal areas will be needed.

If there's an unusually large number of blow flies around a property that's nowhere near a meat production plant or similar business, their influx is likely a sign that there's a dead rodent or bird on the premises. The typical places to check are the interior of walls, crawl spaces, cabinets and under major appliances. Usually, if flies are found inside the covers of overhead lights, that's an indication that they're emerging from the ceiling or a wall.

Business owners should observe the same high standards in cleanliness as they practice pest control to prevent rodents or cockroaches from overrunning their premises. Screening on doors and windows are strong deterrents to the flies, as are tight-fitting lids for all garbage cans and dumpsters. Monitoring high-moisture areas, water drainage and leaks, which can also attract the flies, are other measures that can be taken to discourage blow flies from taking up residence.