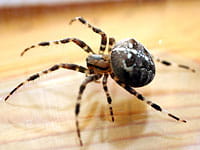 It's safe to say that spiders don't exactly have the same reputation as butterflies do. People usually view spiders as creepy, crawling pests that would look much better outside minding their own business. Unfortunately, these pesky insects often find ways into your home, which can come across as an extreme annoyance. Although most common household spiders are harmless, the National Pest Management Association said there are two species that can harm you if disturbed, those being the black widow and brown recluse.

To identify these two species correctly, it's important to know the main differences of characteristics between the harmful and harmless spiders that are crawling around your home. Here's your guide to identifying common household spiders.

If you find a spider web that replicates the kind you'd associate with Halloween, you've found the nesting grounds of an American House Spider. According to Insect Identification, this spider has long, skinny legs and comb-like hairs on their back ankles, or tarsi, and their bodies are shaped like an oval. The source said this spider rarely bothers humans, so you don't have to worry about it causing you any harm.

Long-bodied cellar spiders, also known as Daddy Long Legs spiders, get their nickname from their very long, thin legs, according to Pest World. Daddy Long Legs spiders are usually found in dark places with higher humidity, such as basements, cellars and crawl spaces. Their weak mouthparts and lack of strength make it impossible to inject venom into humans, so these spiders are harmless.

Jumping spiders have small, black compact bodies with short legs and often have pale markings, according to the NPMA. These spiders create "web retreats" both indoors and outdoors. Inside, you can find the retreats in window and door corners, because insects this spider hunts usually gather in sunlit areas such as those. Outside, you can find the spider under stones, boards, bushes, fences and on decks and tree bark. If provoked, the Jumping Spider may bite to defend itself, but it's not poisonous.

Wolf Spider - harmless, if not provoked

This eight-legged insect is usually dark brown and often has pale stripes or markings along its body. It has long, spiny legs and often tends to be big and hairy, which usually alarms people. Inside, you can find them near the floor level, along the walls and around furniture. Outside, they tend to be under firewood, leaves and stones. It's uncommon for wolf spiders to bite if they're not provoked, so just let them be.

According to Do-It-Yourself Pest Control, you can easily identify the female black widow because of its shiny, black, globe-shaped body with two yellow or red markings that look like an hourglass. As for the males, they have smaller bodies, are lighter in color and have light streaks along their body instead of triangle. If you see a female black widow, don't aggravate it - it will bite, and it's poisonous. The bite will produce a sharp pain and then will turn into muscle cramps within 15 minutes. Though it's not common that the bites are fatal, you should still seek medical attention as soon as possible.

The NPMA said that Brown Recluse spiders can be light to dark brown with a "characteristic dark brown violin marking on their back." These spiders often live outdoors, usually in piles of wood and debris. If the spiders make their way indoors, they can be found under furniture and in storage spaces. Most common indoor hiding places for these spiders are inside dark spaces such as closets, attics and crawl spaces. If provoked, this spider will bite. Bites often leave an open, painful sore that requires immediate medical treatment. If bitten, you may suffer cases of restlessness, difficulty sleeping and fevers.