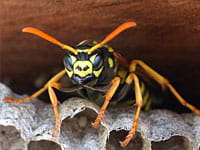 With spring quickly approaching and summertime not too far behind, the weather will soon begin to incline and stay consistently warm. While many people are looking forward to spending more time outside, they are not the only ones - warm weather pests will soon resurface, and unfortunately, that includes the stinging insects, too.

Stinging insects are not pests to mess with, as Pest World reported that these bugs send more than 500,000 people to the emergency room every year. Don't let these pests disturb your happiness in the weather this year - here are a few common stinging insects you need to avoid.

Africanized bees, also known as "killer" bees, look very similar to the common honeybee in color and shape, but they set themselves apart by the difference in the length of their bodies. These bees are known to chase people for more than a quarter of a mile once they've been disturbed, so make certain you do not aggravate this pest - the outcome may be aggressive.

Bumblebees are extremely beneficial to plants and crops, as they pollinate throughout the warmer seasons. Although, they're not favorable when it comes to interacting with human beings because they pose a threat with their harmful sting. These pests are easily identified by their round shaped body and thick yellow stripes along the back and head.

According to Pest World, the carpenter bee looks a lot like the bumble bee besides its lack of bright yellow stripes. This pest gets its name from its habit of drilling into wood as a carpenter would. When disturbed, it stings and leaves sharp pain - so leave it be.

The mosquito is quite easy to identify, as it has a long stinger, delicate legs, a small body and transparent wings. They need water to survive and thrive throughout each stage of life, which is why they often show up at pool parties during the summer. According to Everyday Health, mosquitoes aren't only a nuisance, some carry viruses that can be transferred when they bite, so use mosquito repellent when you spend long periods of time outdoor in the summertime.

Ants may not seem like an offensive pest, but some species can be harmful. Fire ants are usually found in warmer western states, such as Mississippi, New Mexico, Arizona and California and they tend to vary in color, ranging from red, brown and black. The bite of a fire ant is nothing to overlook, as it has been known to send people to hospitals. Steer clear of these ants, especially if they appear in a colony.

According to Pest World, this group of pests gets its name from where it constructs its nest - in the mud. This type of wasp looks similar to a paper wasp, but it's body is completely black. The open-pipe mud dauber is more of a nuisance pest than anything because it rarely stings, but you should still be cautious.

Also known as "cow killers," these pests aren't actually ants at all - they are wasps, and they can sting if disturbed. They get their "velvet" name from the brightly colored, fuzzy body of the females, who are also wingless so assuming they are an actual ant is common.

When you think of getting stung in the summer, you probably think of the yellowjacket. They have a yellow and black head, as well as a matching colored body with an intricate patterned abdomen. If you come in contact with this pest, leave it alone, as it's sting could cause pain and irritating sensation. 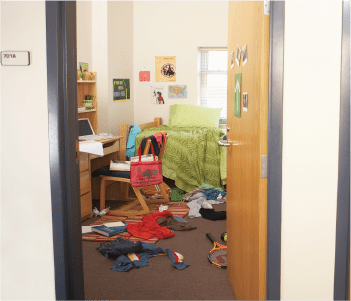 3 ways to prevent bed bugs in your dorm room

Dorm rooms are a space that you can make your own while you're at college. You can decorate them and make them as cozy as you'd like so that it reminds you of home while you're away. However, this cozy home away from home becomes less comforting when you notice bed bugs crawling around your floor or resting in your bed with you. Consider these tips to keep bed bugs out of your dorm room.