What is the difference between a bumblebee and a honeybee? 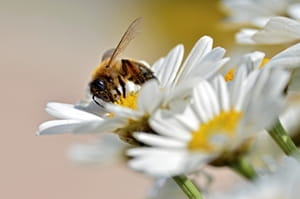 Some people get honeybees and bumblebees mixed up all the time. However, while they might both be black and yellow, these two types of bees are very different. Consider these reasons why.

Bumblebees are known for their fuzzy, chubby appearance. While they have a cute name and seem like they are almost worth petting, they're not. Many people think bumblebees don't have stingers, making them harmless. However, bumblebees do have stingers, and they don't fall out when they attack someone, unlike the honeybee. Conversely, honeybees aren't fuzzy at all. Instead, they're smaller than the bumblebee and have a more narrow body, similar to a wasp. While they do have a stinger, and will strike if provoked, honeybees die shortly after they sting someone.

Some people think that the bumblebee is just the queen bee of a regular honeybee hive. This is false. Bumblebees live in hives with 50 to 400 other bumblebees. In comparison, honeybees live in hives with 50,000 to 60,000 other honeybees, a major difference. Both hives have a queen bee. However, they live very different lives. The queen honeybee lives with many of her daughters and can live between three and four years. Queen bumblebees only live for one year and they sit in a nest underground by themselves. However, all of the other bumblebees die much earlier than her.

Bumblebees also tend to pollinate wildflowers so they usually don't live near residential areas. They're commonly spotted in fields and meadows. Honeybees can be found in the wild, but many beekeepers breed them to create natural honey, meaning they can be in residential spaces.

Honeybees and bumblebees don't produce the same amount of honey. As their name suggests, honeybees' main job is to pollinate flowers and produce honey. They make so much that beekeepers are able to harvest it and sell honey in mass quantities. Conversely, bumblebees are more interested in simply pollinating, but they will create a little bit of a substance similar to honey for themselves. Honeybees also work in conjunction with other bees. They will actually perform the "wiggle dance" with other bees to let them know what flowers need to be pollinated and where they are. Bumblebees do work together with their worker bees, so it's suspected they communicate about pollination spots somehow, but they don't do the wiggle dance.