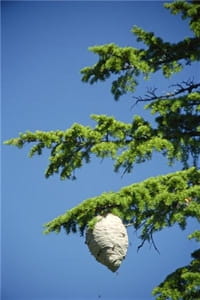 Many people think a bee buzzing around their heads is pretty scary - until they encounter a wasp's nest. Unlike bees, wasps can sting people more than once, and often do if they're disturbed. If you're allergic to their venom, the reaction can be severe.

A nest of wasps, which is constructed of a flimsy pulp-like material, can be built indoors as well as outside your home. They may settle under the eaves of your house, in trees or between railroad ties used as yard barriers. Inside, it's not unusual to find them in attics or spaces between walls. Often, the nests are well hidden and homeowners may not know where they are until they happen upon them by chance.

Still, there are many indications that wasps are nearby, particularly when people are dining outdoors. Wasps are attracted to meat and sweet drinks, two mainstays of outdoor barbecues. These flying pests are also very persistent, so it's not unusual for them to continuously buzz around for as long as food is available. The only way to thwart their efforts is to keep food in sealed containers or use mesh, bug-proof food domes to keep wasps out of your food.

Once a meal is over, there are other concerns. Wasps will also seek out discarded food in trash, so it's important to use garbage bins that have secure tops and to place them some distance from your home. Putting some space between the bins and your house will also lessen the chance that wasps will enter your dwelling.

If wasps enter your house, they will seek out food there. Putting away food and drinks that attract them is good pest management, but keeping outside doors closed is more important to prevent wasps from entering your home in the first place.

Because there's real danger of stings if a wasp nest is disturbed, homeowners who tackle this task themselves may not be able to finish the job or could get stung in the process. The result is that they will end up hurt and there will still be a nest on their premises.

That's why it's best to let a professional pest control service like Abell Pest Controlhandle a wasp infestation. The professionals have the equipment, proper chemicals and know-how to get the problem solved without putting your family in danger. The experts know where to look if the nest's location hasn't been uncovered yet, and they can also advise you on how to limit the possibility of a recurrence.