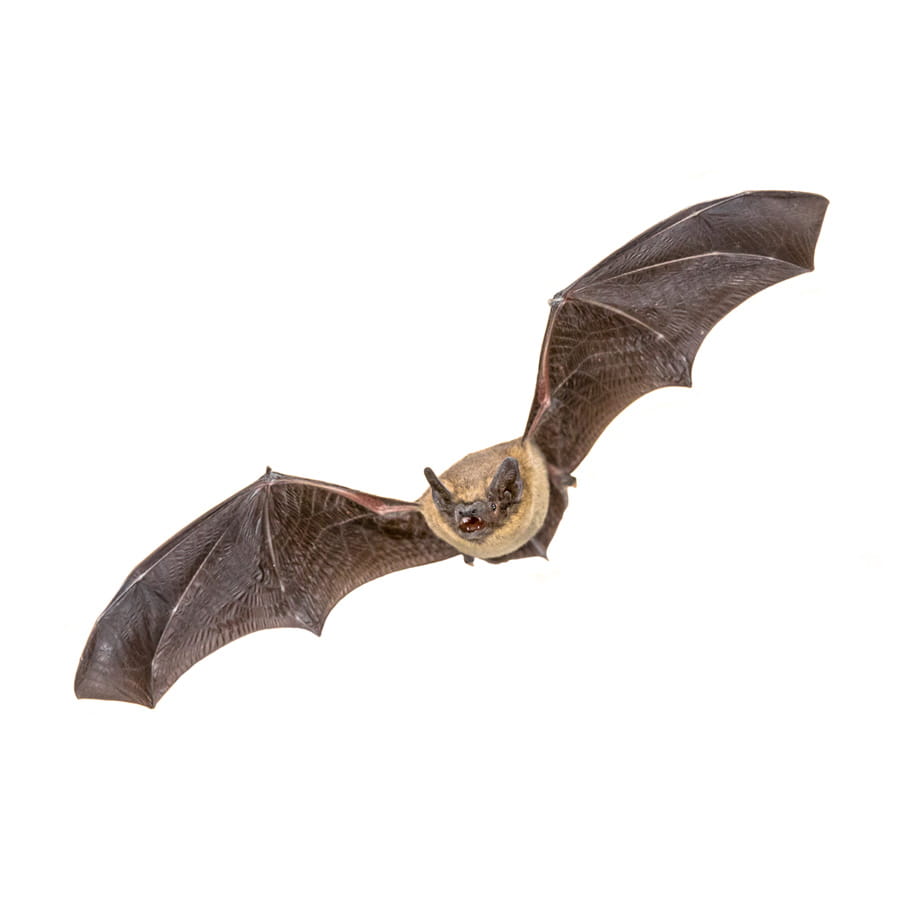 Bats sometimes take up residence in homes and other structures where their presence may be unwanted. Bat guano & urine can cause odour issues as well as damage & contaminate the spaces where bats have taken up residence. Bats can transmit rabies, histoplasmosis, and ectoparasites -a bat bug similar in appearance to bed bugs.

Little Brown Bats are nocturnal and only leave the roost to feed at night. At the height of summer, this gives them only 1 to 2 hours a night to hunt insects. During summer, females roost in colonies of up to several hundred bats and give birth to a single pup. Males roost alone or in small separate groups. In the fall, Little Brown Bats leave their summer range and migrate to hibernation sites. Bats return in the spring to the same roost year after year.

Little Brown Bats can be found across Canada and the United States except for Florida, Texas, and southern California. They were once the most common bat species found.

Little Brown Bats prefer to roost in trees, caves, buildings, rock crevices, under shingles, or tree bark. They roost close to water, where they forage for insects at night.

Colonies of Little Brown Bats migrate in the fall to winter roosts in mines or caves in controlled humidity. They hibernate from September through to March - April.

Little Brown Bats eat insects like mosquitoes, tipulid, moths, wasps, and other flying insects. They can eat an average of 1000 insects per night or half their body weight. They feed at night and are most active two or three hours after sunset and before sunrise. They rest in between to conserve energy and digest their food. They fly near the surface of the water and drink while in flight.

Mating occurs in the fall, but females do not become pregnant until spring hibernation ends. After a two month gestational period, females give birth to usually one or occasionally two young in May - July.

Females return to the same maternity colony year after year.

Is the Little Brown Bat endangered?

Yes. In Canada, the Little Brown Bat is classified as endangered. This is largely due to the white-nose syndrome and other environmental factors.

Is it true that bat bites often go undetected?

False. If the person is awake & conscious, they will feel a bat bite, described as sharp needle pokes. However, bats are small and can bite a human without the person ever knowing when they are sleeping or children. Seek medical treatment immediately if bitten or suspected to be bitten by a bat due to possible contraction of rabies.

We found a bat in our home - should we be concerned about rabies?

Bats cannot transmit rabies by simply being in your residence. If a person or a pet is bitten or scratched by a bat, please reach out to your local public health office for detailed instructions about what to do.

How can I prevent bats from getting into my home?

To prevent bats from getting into your home, we recommend sealing entry points on the exterior of your home; this can include caulking smaller openings, having chimney caps with 1/4-inch wire mesh installed, sealing around electrical and plumbing conduits, and screening over the roof gables & attic vents, etc.