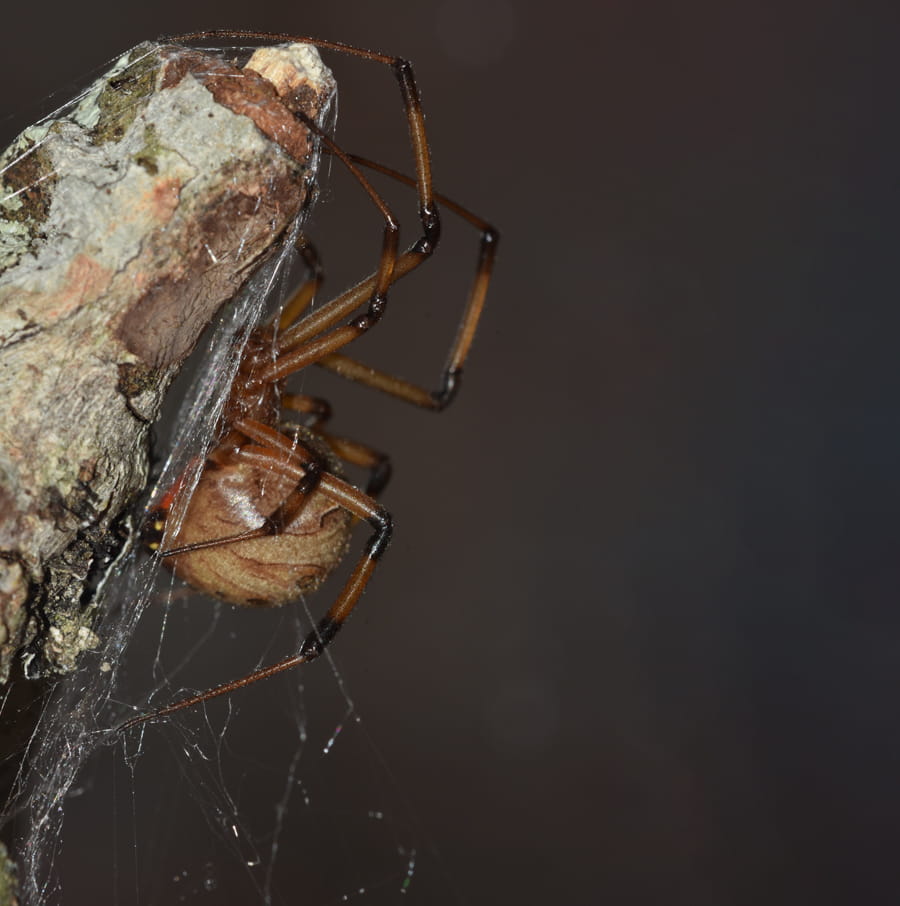 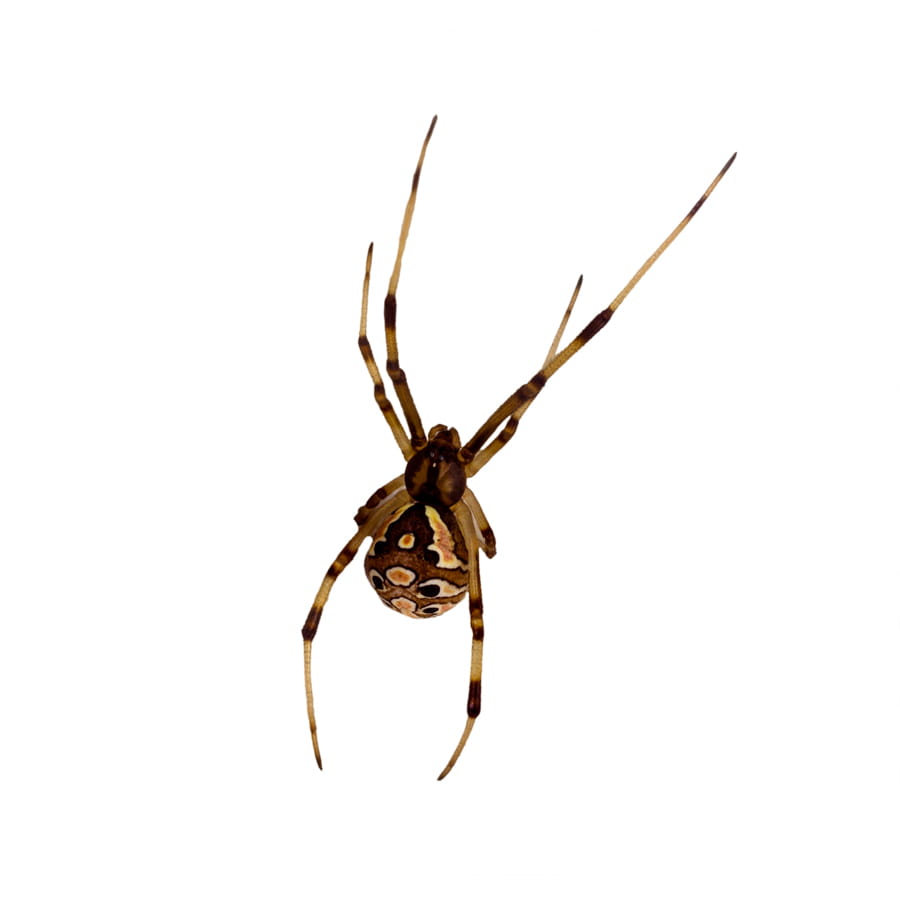 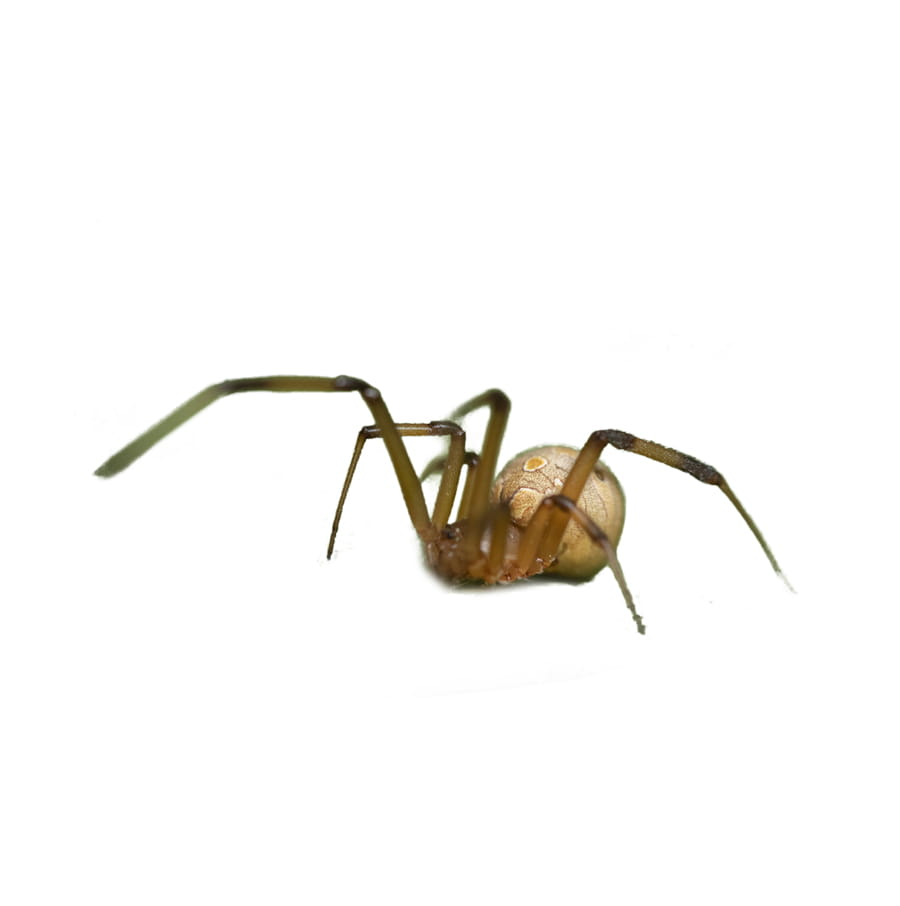 Although Brown Widow spider venom is more potent than their black widow cousins, they tend to inject significantly less when biting and are known to be quite timid, often fleeing when disturbed. Because of this, Brown Widow spiders are considered only as dangerous as non-toxic spiders. The vast majority of reports show they leave only a bite mark and nothing more however, there have been rare reports of more severe symptoms that require hospitalization from the bite of the Brown Widow spider.

Mature Brown Widow spiders typically sport a mottling of tan and brown with black accents. Mature females often have a long abdominal stripe running from front to back, with three diagonal stripes on each side. A square-ish black mark can be found at the top of these diagonal flank stripes.

The coloration of mature Brown Widow spiders is similar to that of immature Black widow spiders and can confuse them when trying to identify them.

Similarly to the Black Widow spider, Brown Widows do have an hourglass shape on the underside of their abdomen however, instead of red, it is typically vivid orange or yellow.

Brown Widow spiders tend to be found in more open areas than Black Widows. Often nesting around widows, under eaves, along the ledges of brick walls, under picnic tables, in tree hollows, among the debris, and even in buckets or mailboxes.

A female Brown Widow spider clusters her egg sacs together in her web. Egg sacs are unique in that they sport white, silk spikes on the surface, which are not present on egg sacs of any other of their species. Spiderlings hatch from eggs in 14-21 days but remain in the egg sac for up to a month. Newly hatched spiderlings are pale, lacking any discernable patterns. Upon molting, the young spiders develop their tell-tale adult coloration, including their abdominal hourglass pattern (though it remains white for some period), at which time they leave the sac in search of new territory.

How do l recognize a brown widow spider?

Brown Widow spiders have light-colored abdomens, pale stripes with dark blotches at the top, sporting a vivid orange or yellow hourglass marking on their undersides. The black widow spider is much darker in color, with a vivid red marking on her abdomen.

Although their bites do sting, the bite of a brown widow spider is considered less dangerous than that of the black widows, as it releases far less venom with each injection. Additionally, brown widows are generally considered non-aggressive, biting only as a last resort.

What can I do to prevent a brown widow spider infestation?

Brown Widow spiders are found in more open areas than black widows. Hose or sweep off webs, nests, and spiders from the outside of your property. Seal cracks in the foundation of your home and around doors and windows to keep spiders out.

How do I remove a brown widow spider infestation?

Although they rarely bite and are less dangerous than their black widow counterparts, brown widow spiders have the potential to harm and should be handled very carefully if encountered. Contact Abell Pest Control to remove brown widow spiders safely and effectively in your home.