Business owners face tough task when spiders are around 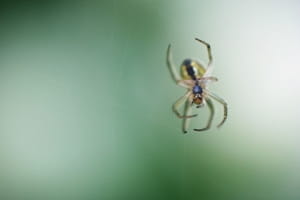 Many people recoil at the sight of a spider. Whether it's a relatively harmless "daddy-longlegs" or one that resembles a scorpion's cousin, spiders send shivers up many spines. It's bad enough when they see them in their own homes, but if a spider is seen at a restaurant or other commercial environment, lots of people want to head for the door.

They don't want to hear the good points about spiders, either. For instance, spiders are arachnids, not insects, but they eat insects. That's often a boon to homeowners because it keeps their yards and gardens healthy by balancing nature. Also, while there are spiders with a poisonous bite, those commonly found in homes don't pose a health threat to humans.

But when a spider makes an appearance at a public venue, people may associate it with filth, because insects conjure the same image. Whether that's true or not, what can responsible business owners do? If they care about their image and the word-of-mouth criticism that's likely to follow such a sighting, they need to get rid of the spiders as soon as possible.

More than likely, they'll need the help of a commercial pest control company like Abell Pest Control. With a thorough pest inspection and a well-planned course of action, the spider population seen at a place of business can be a thing of the past.

The best pest management involves ongoing maintenance, a general understanding of common pests like spiders and how to avoid infestations. Getting rid of spiders means constant upkeep. This can be difficult to do in a restaurant, store or other workplace, but designating staff to keep the venue clean will deter a number of pests, including spiders.